The King of Thailand, Maha Vajiralongkorn (officially King Rama X), gained the throne from his father, King Rama IX, after he was coronated in 2016. The new king is an interesting guy to say the least. The Business Insider calls him the richest royal alive with a net worth of over $30 billion. Most of his money is held in property and stocks but he is also known to own stranger items such as the largest diamond in the world. However, it appears that this leader is as bizarre as he is rich.

You may be interested to hear that the King was educated here in the UK (Millfield School, Somerset) until the age of 17, when he went on to attend a military school in Australia. Although not shy of the limelight, it is rare he enters the public eye for a positive reason. Images of the King shopping with his mistress in Germany whilst wearing a crop top and multiple temporary tattoos caused a new level of controversy which resulted in the Thai government attempting to suppress circulation of the images. This scandal, amongst other stories of the King’s private life, has lost him a lot of support. His public behaviour is seen by many in Thailand as unprofessional, and embarrassing, however, instead of the King being held to account by the government, they have opted to attempt to stop rumours circulating, with the government even threatening to sue Facebook over the publication of the controversial images in Germany. Sharing these pictures is now illegal in Thailand, where its strict laws on criticising the monarchy have caused 105 people to be imprisoned since 2014.

Another example of the King’s eccentricities can be seen in his treatment of his dog “Air Chief Marshall FuFu” who was given the title of an official Air Marshall. FuFu served in the air force for six years and supposedly took multiple flights in military jets and helicopters. Fortunately, it is believed FuFu never attempted to fly himself. Yet FuFu’s military career isn't even the weirdest bit - a man was once sent to prison after insulting a different dog named Copper, owned by the King on social media, as Copper was considered a high ranking member of the royal family. Air Chief Marshall FuFu’s death was followed by four days of mourning and a public cremation.

During this Covid-19 outbreak, it has been reported that the King fled Thailand and flew to the Bavarian Alps, where he stayed in a hotel with 20 women. This hotel remains the only hotel that has been allowed to stay open in Germany and the scandal was recently exposed by the German press. It is believed that the local district council permitted the visit, causing controversy in Germany with many arguing that the King should not be given special treatment. It may not come as a surprise to many as he reportedly spends most of his time travelling the world with a specific soft spot for Germany, where it is believed he has a lakeside residence.

But it’s not all fun and games; this King has shown himself to have a strong authoritarian streak. Since 2016, he has given himself emergency powers over the Thai government, meaning he has direct decision-making abilities in times of crisis without having to consult parliament. He has even made units of the Thai military report directly to him - just another step towards authoritarianism in Thailand after the military coup in 2014, which gave the military automatic seats in the Thai parliament. This means the military’s power and control over the people have increased drastically and poses a real threat to democracy in the country.

Thailand’s strict lèse-majesté laws make it illegal to even criticise the royal family or king. These laws prohibit any publication of negative news about the King, which means the accusations of his involvement in illegal businesses, his gambling addiction, and even some of his funnier goofs are not allowed to be published. The King and his militaristic government have recently demonstrated behaviour comparable to 20th century European dictators when he banned the pro-democracy party FFP from elections; a move that is believed to have sparked the current unrest. 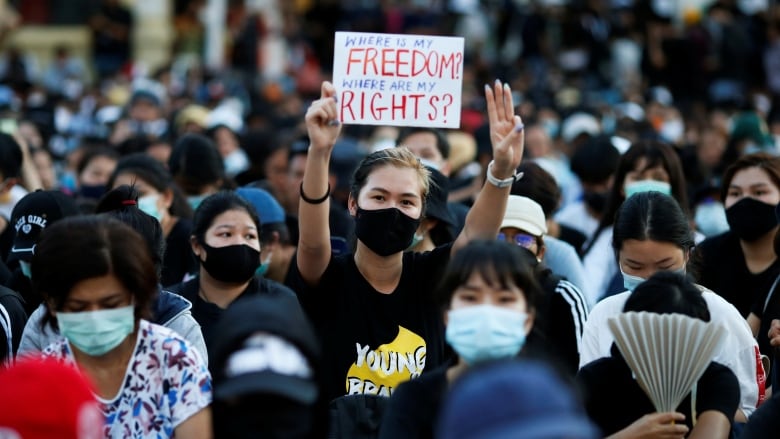 Fighting the Thai government in Thailand’s biggest protest ever; 18,000 protestors are believed to have attended.

The people of Thailand are taking action and standing up to their authoritarian government. In 2020 protests have rocked the nation with thousands of citizens protesting on the streets. The student-led protests started in July and are ongoing - they are calling for severe reform of the monarchy and more power to the people. In Thailand, unlike the UK, the monarchy plays a major and active role in government and has come under severe criticism for its poor ruling. The protestors also want electoral reform after disputed elections that are believed to have been rigged. "Down with feudalism, long live the people" is a popular chant that shows the opposition of the protestors to the current system of the monarchy. The protests have been peaceful and the Thai Chief of Police has stated that the police would not use any force against the protestors. This may be to avoid further controversy, as shows of police violence may make more people sympathetic to the protestors.

It remains to be seen whether King Rama X’s grip on the country will tighten or whether the people’s views will be heard and the king will be ousted.