Everyone remembers when Big Ben underwent refurbishment back in 2017 and the outrage it caused with tourists who claimed they were deprived of their full London experience. This was a sentiment shared by natives and tourists alike when L’Arc de triomphe, empaqueté went on display on September 18thof this year. Yet, the landmark’s sudden state of envelopment wasn’t due to maintenance work.

L’Arc de Triomphe empaqueté (L’Arc de Triomphe wrapped) was the last artwork originally conceived in 1962 by the artistic French couple Christo (1935-2020) and Jeanne-Claude (1935-2009). A few months ago this vision was realized, consisting of the famous monument (which commemorates those who fought in the French Revolutionary and Napoleonic Wars) wrapped in 323,000 feet of silvery blue polypropylene fabric and held in place with 22,960 feet of rope. The couple were renowned for their controversial outdoor installations, usually made of fabrics and plastics, that were meant to be both imposing and visually spectacular. Notably, they claimed that their art was “owned by nobody but experienced by everyone,” dedicated to the art of simple aesthetic and to gifting the public the opportunity to view things in a unique way. 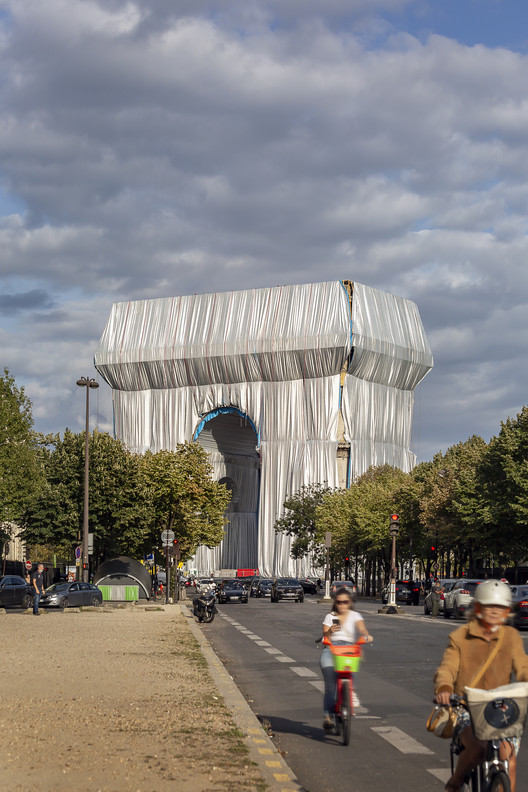 The idea for l’Arc de Triomphe empaqueté was an idea that spanned over 5 decades and began shortly after the couple first met. Jeanne-Claude had commissioned Christo to paint a portrait of her mother back in 1958 and in 1962, Christo and Jeanne-Claude’s first exhibition appeared in Cologne named Curtain which involved the pair blocking an alley with 240 barrels for several hours. It was a poetic response to the Berlin Wall, the Cold War and separation many were made victim to at that time. From this moment forward the couple’s ideas for large, outlandish exhibitions skyrocketed.

The 70s saw the installation of their first large scale exhibition and most exorbitant piece of art to date, Valley Curtain which only lasted 28 hours due to environmental factors. The piece was captured in a short documentary by David and Albert Maysles and earned them a nomination for Best Documentary Short in 1974. After their first taste of grandeur the couple began work on Running Fence in 1972; the piece consisted of 24.5 miles of white nylon on steel posts and cables across the Californian landscape into the ocean. Unfortunately, construction only got underway 4 years later due to the artists being held in court with 18 public hearings and 3 state court sessions. The couple would find themselves constantly battling with the law and working together with environmentalist groups to ensure that their work would have the most positive impact on people without damaging the natural wildlife around their larger-than-life installations.

As the 80s rolled around, Christo and Jeanne-Claude really came into their artistic selves and committed themselves to their wrapping. At the start of the decade, Jeanne-Claude formulated the idea to surround 11 islands in Miami’s Biscayne Bay with 603,850 m 2 of fluorescent pink polypropene fabric on display for 2 weeks in the Spring of ‘83 aided by 430 workers all clad in pink long sleeved shirts designed and produced by one of the most affluential American designers of his time, Willi Smith , often dubbed ‘The Father of Streetwear’.

By this point, the couple had solidified themselves as leading figures in the world of conceptual art. The 90s not only saw the simultaneous installation of The Umbrellas in Japan and California (consisting of 3,100 umbrellas, which cost the pair US$26 million and attracted over 3 million visitors) but was also the wrapping of the Reichstag which, after 24 years of governmental lobbying under the parliamentary rule of 6 different presidents, was finally permitted. Wrapped Reichstag became a symbol of the now unified Germany and saw Berlin rise from the ashes and return to being a world-leading city.

The couple went on to create many more outlandish innovations in the art community with The Gates (full title The Gates, in New York Central Park 1979-2005), Big Air Packages, The London Mastaba: a temporary floating installation on The Serpentine. This was to be Jeanne-Claud's last project to work on as she passed in 2009 from complications due to a brain aneurysm. She famously said "Artists don't retire. They die. That's all. When they stop being able to create art, they die." Without his partner, Christo went on to oversee their last artwork L’Arc de Triomphe empaqueté . Sadly, Christo was unable to see their last work of art as he passed in 2020 before the exhibition of their final love letter.