The classical children’s novels, featuring the adventurous group of young teens facing the world, has been adapted into a larger-than-life musical set in the picturesque town of Kirrin.

The Famous Five: A New Musical, based on the Enid Blyton’s series of the same name, follows the 3 siblings, Julian (Dewi Wykes), Dick (Louis Suc) and Anne (Isabelle Methven), as they spend the summer with their estranged Uncle Quentin and Aunt Fanny (David Ricardo-Pearce and Lara Denning). The gang meet their new cousin George (Maria Goodman) and her secret companion, Timmy the dog. At first, the cousins seem to butt heads, but when a shadow from Quentin’s past appears, Rowena Rolland (Kibong Tanji) comes to exact revenge and the 5 must test their mettle and face their fears.

Director, Tamara Harvey, does a tremendous job at bringing the books of our childhood to life and creating an all-round superb experience for the viewer. Theo Jamieson’s orchestration is second to none. Each song is perfectly arranged and helps the story to develop, creating a varied and magnetic atmosphere. Elinor Cook’s writing incorporates some more modern themes, which really bring a more relatable sense to the characters and their plights and troubles. The recurring theme of the climate crisis - though you may assume it to bring the mood down - formed a strong sense of relief, as if to say, “we can tackle this if we work together." Cook touched on other important ideas such as gender identity and the empowerment of women which, for the fair few families that I saw in the audience, sent an empowering message to the younger children to express who they want to be and defy the societal expectations that may seem predestined.

What makes this family classic so inviting and adventurous, is how Harvey has been able to centre the musical around very real and current issues while still maintaining an enjoyable experience for every member of the audience. I was extremely intrigued as I watched the show in the Theatre Clwyd, to find heavy reference to the current issues we are suffering through in today’s world. I was even more touched to hear the tomboy “misfit”, George, talk about how she felt “like (she) was standing next (herself)” as she refused to be called Georgina. 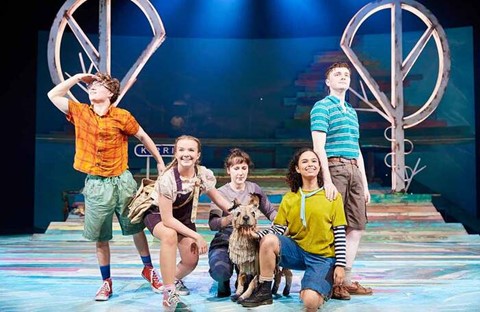 The 4 stars (and the dog!) themselves achieve a sense of unity that is thoroughly enjoyable to watch. Each character has its complexities and differences, making the viewing experience even more comical, from the meek and mild Anne to the loud and fiery George. Julian plays the role of the older brother bearing the intense weight of responsibility, feeling as though he’s “drowning”. Dewi Wykes does a phenomenal job at portraying the character, exploring the facade that he is trying so hard to hide behind. This is unsurprising considering his equally complex character of Pwdin Evans in National Theatre Wales’ Petula received rave reviews for Wykes’ acting ability. Contrastingly, Dick is the over-active and energetic middle child, yet there is a sense that with each over-the-top request of more sandwiches, he desires to be heard and not overshadowed by his older brother and “perfect” younger sister. Louis Suc is no stranger to the stage and screen, treading the boards as both Charlie (Charlie and the Chocolate Factory: The Musical) and Eric (Matilda: The Musical) as well as staring in Roger Michell’s My Cousin Rachel based on Daphne du Maurier’s novel of the same name. Suc’s experience shines through in his stunning solo “Jump, Fly, Fall,” as hopping around the stage while belting out inspirational songs is no easy feat. Completing the family is Anne, the overlooked younger sister who is forced to put up with her highly critical older brothers. Another veteran to the stage, having made her professional debut in Les Miserables, Isabelle Methven went on to play Summer Hathway in The School of Rock as well as Annie in Annie. Methven’s insane range and dynamic character shines through on the stage and creates a thoughtfulness that elevates the story. To complete the (human) mix, George is the misfit, problem child who is second best to her father’s work and struggles to be understood for who she is. Although no rookie to the stage, having starred as Ngana in South Pacific as well as Tiger lily in Theatre Royal Margate’s Peter Pan, Goodman recently made her TV debut on kids ITV show Teds Top Ten as Jada. Playing the youngest of the crew, Maria Goodman creates, at first, an anger-riddled almost 13-year-old who then develops into the rough and tumble part of the gang, a varied and emotional role that Goodman creates with great maturity.

The more senior cast assist in creating a remarkable show. The semi-estranged and awkward Quentin, played by multi-talented David Ricardo-Pearce, is beautifully contrasted by Laura Dennings’ Fanny, gentle and accommodating in every way, showing the diversity of human nature and how battles are easier fought together. Kibong Tanji’s Rowena Rolland seems to subvert all stereotypes of what a villain is and teaches the moral that everyone deserves to be heard and have a second chance. A personal favourite of mine is the jack-of-all-trades, Bobby. Sam Harrison shows that you should never let go of your inner child (or the copious amounts of fancy dress get-ups!)

This brand-new musical is a must-see and has successfully made the list of my ‘favourite musicals.’ Not only for its incredible score, phenomenal writing and talented cast, but for the sheer joy it brings me to see a musical that is relatable, funny, and utterly satisfying to watch!