Opinion: “Fake news” and the Manipulation of the Media

“Fake news” is a term that has become very present in the public mind. According to the Cambridge Dictionary, “fake news” is defined as a misleading story that appears to be news that is spread on the internet or other media platforms. These stories are usually created to influence readers’ political views.  There is no better illustration of the impact of fake news than the political instability in the United States under the Trump administration.

Donald Trump continues to live in an alternate universe where he has won the 2020 Presidential Election. He is still relentlessly bombarding his followers with the lie that President-Elect Joe Biden only won the election by cheating and that, as he wrote on Twitter, “the election was rigged”. Trump is persistent in undermining the will of the American people by fostering the false narrative that the Democrats seized control over the electoral system. In response, President Trump’s diehard fans have attended many ‘Stop The Steal’ rallies to support Trump in his repeated yet groundless allegations of electoral fraud. Tensions between the far-right Proud Boys and left-wing Antifa activists led to violence erupting across the streets of Washington and then, of course, there was that incident at Capitol Hill. Clearly, Mr Trump has ignored the weight of his allegations and the fact that he is actively contributing to this era of ‘fake news’ which threatens American democracy.

The scourge of fake news has been growing since the 2016 US Presidential Election. According to an article written by Hunt Allcott, Associate Professor of Economics at New York University, and Matthew Gentzkow, Professor of Economics at Stanford University, pro-Trump fake stories were shared on Facebook a total of 30 million times compared to the 7.6 million times which pro-Clinton fake stories were shared. Trump benefited from the Pizzagate conspiracy which linked Hilary Clinton’s campaign with a fictional human trafficking ring – this was effective in diminishing her credibility with the American public. Pew Research found that 62% of US adults got news on social media in 2016, which poses the question whether Donald Trump would have been elected president were it not for the influence of fake news on social networking platforms. 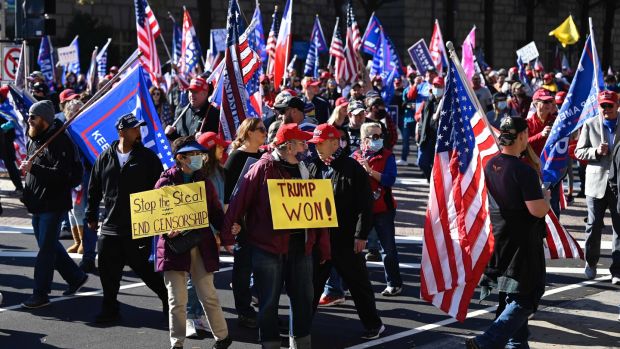 In addition, President Trump poses a threat to freedom of speech. He has called journalists and news outlets ‘fake news’ nearly 2,000 times since the beginning of his presidency. This undermines the credibility and legitimacy of journalism, creating mistrust within the public from which Mr Trump clearly benefits. As the media is continuously demonised by Trump and his allies, people turn to him for the truth, giving him and those around him the power to politically manipulate the public to achieve their desired outcome. For every attempt he has made to undermine reporting as “fake news,” Trump has himself made nearly 10 times as many false claims. This creates an era of misinformation and disinformation.

Both the 2016 US Presidential Election and the 2020 Presidential Election reveal the impact of fake news. It has the power to influence votes and is often used by politicians to further their personal agendas. Fake news creates a polarised world, sparked with violence, disunity, and disinformation, and the public are the victims.