From 5 to 9 November, Notre Dame assemblies had an air of respectful solemnity as our community commemorated Armistice Day. This marks the anniversary of the signing of the armistice between the Allies of the First World War and Germany, bringing about the cessation of hostilities at 11 o’clock on the 11th of November, 1918.

This year we are commemorating the centenary of the end of the First World War so it seemed only fitting that 17 of our students should stand before their peers to recite from the diaries, letters and poems of soldiers, nurses, doctors and veterans who experienced it first-hand.

The assemblies were led by students Maia Hall and Matthew Gerard, who focused particularly on the stories of soldiers and nurses from the West Yorkshire region. They brought our attention to the Pals Battalions commonly formed in the north of England. These were made up of men who enlisted with their friends and neighbours, so they could serve together rather than being allocated to random battalions. Their survival rates were shockingly low. Most of the Leeds Pals, along with those from many other Pals regiments, died on July 1 1916: the first day of the Battle of the Somme. It’s thought that, of the 900 men in the Leeds Pals, 750 died, just a handful of the estimated 19,240 British soldiers killed on that day alone.

Our students also told us about Nellie Spindler, a Wakefield-born nurse who volunteered to join the Imperial Military Nursing Service. Nellie was posted to Belgium in July 1917, where she was killed by a blast at a hospital a few miles from the front line near Ypres. She is the only woman buried with full military honours at Lijssenthoek Military Cemetery in Belgium.

Of course, the assemblies commemorated all those fallen, including the soldiers from India, New Zealand, Australia and Canada who fought, as well as the Chinese workforce that supported the Allies.

Our students read from eyewitness reports of gas attacks and recounted the effects of exposure to gas, even for soldiers who successfully fitted the helmets provided. They also quoted Notre Dame students humbled by a recent visit to Tyne Cot in Belgium, the largest cemetery for Commonwealth forces in the world, for any war.

Towards the end of each assembly, we heard the words of Harry Patch, the last surviving veteran to have fought on the Western Front. Before his death in 2009, Harry spoke about his experience of fighting at Passchendaele. When he went back to the site of the battle to pay his respects to the fallen, he was quoted as saying that ‘war isn’t worth one life’.

Staff and students reflected on this during a two-minute silence which began each time with the playing of Last Post on the trumpet. Everyone then left the hall without speaking.

Thank you to the following students who gave up their time throughout the week to participate:

Thanks also to retired Notre Dame teacher Christine Cox for all her help in organising the assemblies. 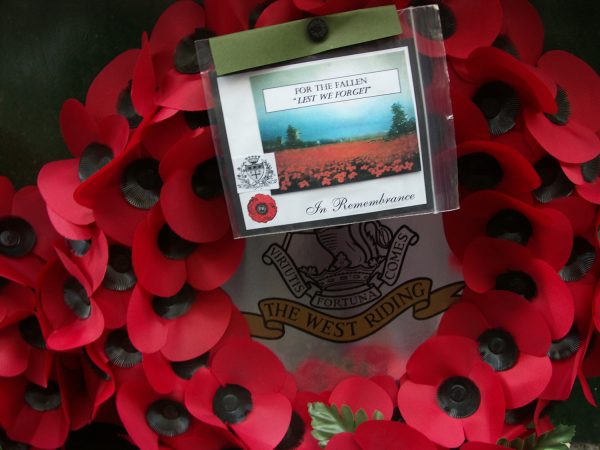 Pictured above is the Notre Dame wreath, which has been present in our Armistice Day assemblies for the past 13 years. It has been laid at key sites of First and Second World War battles across France and Belgium by visiting Notre Dame staff and students as a symbol of our respect and gratitude.